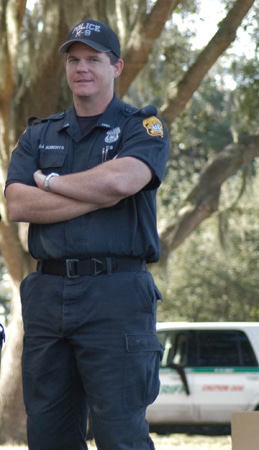 On August 19, 2009 at 9:58p.m. Corporal Michael Roberts was patrolling on Nebraska Avenue in a neighborhood that recently experienced several burglaries. He observed a suspicious person pushing a shopping cart full of items and initiated a stop. The suspect began struggling with the Corporal who attempted to use his taser.  The suspect ran across Nebraska Avenue at East Arctic Street and the officer chased him on foot. They began fighting again on the west side of Nebraska Avenue when the suspect pulled out a gun and began pistol whipping the officer. He then fired one shot. The bullet hit Corporal Roberts on the right side of his chest area that was not covered by his bulletproof vest.

38-year-old Corporal Michael Roberts will be remembered as an outstanding officer, husband, father and member of the TPD family. He began his career with the Tampa Police Department in 1998. He served in Patrol until 2005 when he became a K-9 Officer. He served one year as a Field Training Officer and was promoted to the rank of Corporal on July 12th, 2009. Roberts was honored with a Life Saving Award in 2005. During his 11-year career, he was awarded dozens of Letters of Appreciation from citizens, supervisors and other law enforcement agencies. He served with the U.S. Air Force and the U.S. Army.

He is survived by his wife and son. He was a dedicated family man. Mike was known for his sense of humor and practical jokes that could make anyone smile. He was an avid sports fan and played goalie on a TPD Hockey Team.

Precinct Pizza will match all donations made through our store up to a $500.00 per month. We have a condolence box at our counter in our store, or you can send your gift to:

Our payments to the Fallen Heroes fund will be made monthly. Precinct Pizza feels the pain that many have felt through the Tampa Bay area. This Officer was not just a symbol of Heroism, but he was our customer, & friend as well. Many Police Officers dine at Precinct Pizza, & we have come to know many of them well.

Thank You, and thanks to all those who protect and serve us. Always stop and thank Police, Fire, Emergency Medical Services, & Military personnel for what they do.